What is an ILP (Integer Linear Program)

ILP stands for integer linear program. ILP are special way of stating an optimization problem for an ILP solver to solve. ILP are formulated such that there are a certain number of variables defined, there is an objective function that we want to maximize or minimize and there are linear constrains to the variables.

Example of a linear program (Not ILP yet 😉)

Let’s say you are following a diet. Let’s say, for the day, you are not allowed to eat more than 2000 calories, but you have to eat 75 calories in proteins and 1000 calories in carbohydrates.

Let’s say the available dishes you can eat 🥩, 🌮, 🍔 and 🍝. Each dish, gives this amount of calories, proteins, carbohydrates and an overall satisfaction.

We want to maximize the overall satisfaction eating, without exceeding the allowed 2000 calories, but still satisfying the amount of proteins and the amount of carbohydrates.

Usually, when we formulated the LP problem, we can solve it with an LP solvers. I personally use Guroby, but there are many LP solvers out there that you can try.
Let’s try to feed the problem to a LP solver.
You can try it yourself in this link. 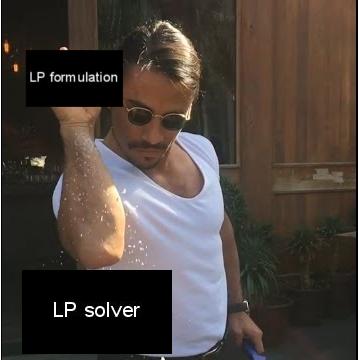 You can note from the solution of the LP, that the solution is not an integer. ILP solves that!!! You can specify which variable you want to be an integer.
Let’s rewrite the previous LP and make the variables integers. 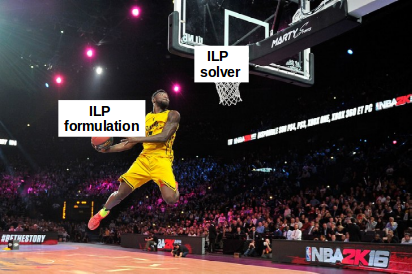 Still don’t get what ILP are used for?

What kind of problem are ILP for?

And those problem are respectively an abstraction of the following, more practical problems: